”And it seems to me that the defining feature of our modern wars is not any kind of technological change — no matter how startling the deployment of drones is, or the use of social media by combatants — but rather the degree to which the average citizen of a Western democracy has been able to divorce himself from responsibility for wars waged on his behalf, and with his tax dollars.”

The quote above comes from an insightful piece in the New York Times by Phil Klay, one of my favorite writers and the author of Redeployment.

I’ve long been attracted to large, messy problems and the ways technology can offer solutions — greentech for our environmental crises and autonomous vehicles to reduce driving fatalities, for example — but the prose shocked me into the realization that foreign policy, in particular military doctrine, is an area seemingly devoid of mainstream altruistic focus in Silicon Valley and the wider tech world. Yet conflict and its secondary and tertiary impacts affect communities and companies around the world, and those that learn to mitigate their risks and maximize opportunities can thrive in the future.

It’s easy to forget that the country has been fighting a war in Afghanistan for 16 years, the longest war in U.S. history. It’s easy to forget that President Obama, calm and peaceful compared to the president-elect, has directed the armed forces to bomb seven countries (Syria, Iraq, Afghanistan, Libya, Yemen, Somalia, Pakistan). And I don’t blame you for overlooking the headline that U.S. Special Forces are deployed to 135 nations, or roughly 70% of the nations on this planet.

I present these facts, without weighing in on the wisdom of such practices, to frame the following thought-provoking questions. Paraphrasing Peter Thiel, paraphrasing Nietsche: “Madness is rare in individuals, but among societies, it is the norm.” In a wiser, more peaceful future, what mechanisms of our current society will be looked upon with disdain? What aspects of our foreign policy and military doctrine are unsuitable for the future or already antiquated?

My inability to answer these questions led to me to create a focused approach to learning about foreign policy, beyond staying up to date on current events. 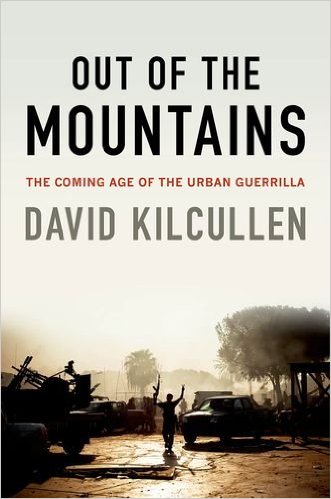 David Kilcullen is a counterinsurgency expert who has served in advisory roles for the Department of Defense, NATO, and the White House. He has written several books and military field manuals on the subject and was a principal architect of the Iraq War troop surge of 2007.

“Out of the Mountains: The Coming Age of the Urban Guerilla,” published in 2013, is an exploration into the future of counterinsurgency strategy and conflict studies more broadly. Based on the Amazon reviews, I expected it to update counterinsurgency doctrine to account for growing, urbanized populations around the globe. To my surprise, it’s far more than a military book — Mr. Kilcullen demonstrates excellent knowledge of systems theory and present fascinating insights related to the ways technology and society will shape each other in the coming years.

Mr. Kilcullen outlines four megatrends that are driving most aspects of future life, not just conflict: population growth, urbanization, littoralization (the tendency for development to cluster on coastlines), and networked connectivity. The scale and complexity of these factors is multiplied when you realize that climate change effects and population growth will primarily manifest themselves in low-income, sometimes unstable countries. He makes a compelling case that most future conflicts will not be found in rural, often mountainous areas as we are accustomed to seeing in Afghanistan, but rather large coastal cities in emerging economies. Thankfully, he foresees a drastic decline in the risk of large, state-on-state conflagrations.

Diving into political science with these four characteristics in mind, Mr. Kilcullen builds a persuasive argument about the underlying foundations of power in irregular conflicts. He comes close to fulfilling a classical approach of "building from first principles" to arrive at an axiom that diverges from the policies in place by major Western democracies:

”In irregular conflicts, the local armed actor that a given population perceives as best able to establish a predictable, consistent, wide-spectrum normative system of control is most likely to dominate that population and its residential area” where a normative system is a “system of norms (behavioral rules) paired with sanctions (costs and punishments for breaking those rules).”

What this statement implies is that whether a populace agrees with the rules has little effect on power; instead, it's predictability and consistency that makes people feel safe in unstable times or societies developing rapidly. Local groups jockeying for power create incentive structures that are easy for individuals to get into, but difficult to escape: for example, some drug cartels provide housing to loyal community members and the Taliban earned loyalty by adjudicating tribal disputes, forcing citizens to provide tacit acceptance of their radical legal system. The Unites States' strategy of winning "hearts and minds" may need a rethink, as it's the incentive structures (persuasive, administrative, and coercive) that determine influence rather than populaces' support of a system.

Unfortunately, this book was prophetic, as ISIS's rise to power and its vicious brand of justice occurred in the time after the book was published, in the manner predicted by Mr. Kilcullen. His theory explains the paradox of how the group can maintain power while local populations express hatred for its policies.

Implications for the Tech World

It’s important to remember that tech developers and designers living in San Francisco, Washington DC, NYC, etc. live in an environment that’s completely different than the majority of people on the planet. For entrepreneurs and companies seeking a global business, the ability to understand local populations (and acknowledge their needs) is invaluable. Part of understanding local populations is understanding how power flows through the formal and informal networks present in a city/region.

A counterintuitive idea stemming from the book: what if users’ desires aren’t the driving force behind use/adoption of a particular system? Many of the same sociological principles driving populations’ allegiances to local groups motivate individuals on day-to-day decisions. I can think of numerous cases, whether it’s enterprise software or cell phone data plans, where the incentive structure is “easy for individuals to get into, but difficult to escape.” This isn’t a revolutionary idea - just peruse the Vendor Lock-in Wikipedia page - but one that’s often overlooked by designers/developers/marketers alike. If you design a small, portable, Android-compatible keyboard that’s twice as efficient as the QWERTY layout, you face a steep adoption battle in the U.S. market. But the same product could be an instant sensation in Lagos, Nigeria, where the typing format isn’t as entrenched and a huge proportion of business is conducted over mobile internet. Users stateside want to type faster - it’s just that leaving the consistency and predictability of the QWERTY system incurs steep costs due to the learning curve and lack of availability of the new keyboard in the workplace and common areas.

This book introduced me to a class of violent, messy problems rarely considered by the tech industry, and presented useful mental models by which to craft solutions. I encourage you to seek our reading and learning opportunities outside of your domain of expertise, as you too may find unique sources of ideas and inspiration.

For more information on what else I’ve been reading recently, check out my Learning page.